They danced. The birds did. They flew through the sky on wings light with freedom. They soared over head in the clear blue midday sky, and sang songs filled with the warmth and the happiness of spring brought to them. It was a time of birth and rebirth. It was a time of hope. The flowers bloomed, and eggs hatched. New life was being born all around in all its different multitudes of ways. The woods fairly danced with the energy of it, the joy of it, and all was right with the world. Or at least in this small part of it. Life was all around, yet the Emperor saw none of that. The world through his eyes was a dull lifeless place that not even the majesty of the forest could help dispel. He could hear the song of the birds, yet it was not a song of new life to him... It was a song that be spoke death. They sang their children into this world knowing that they would pass; knowing they themselves would die in the end. Life was just so… Morbid.

It was these thoughts and more that circled in the young emperor’s head, and finally when he thought he had moved on… Something made it come full circle. His mother had told him to move on, to perk up... To get over it. But he didn’t find it so easy, after all it’s not often that one holds a friend as they gasp their last breath. It’s not often that one breaths a would be lovers last breath.

Qin moved about the woods of the palace grounds, trying to get lost in the beauty that was all about him, trying to find his center… But try as he might he could not find the flame at his center. He could not find the peace that had always been a part of him. He wanted to feed his hurts, his pains and his sorrows to the flame of his thoughts… To rid himself of that burden. But he couldn’t, the pain was just to much. He glanced to the sky, his clear blue eyes fallowing the flight of birds far above him. How he wished he could fly away with them. To escape his responsibilities, to just lose himself in the freedom of flight and a simple unassuming life in the sky. He closed his eyes and saw the smiling face of the woman he had held as she died, just as it had since that time such a short while ago. With a sigh he sat on the soft ground and rested his back against a nearby tree his eyes drifting open to yet again watch the birds that flew high above, a tear escaping and falling unhindered down his cheek. He had to wonder what his forbearers would think of him now, and the tears he shed for someone that most considered insignificant, he also wondered if he cared. With a sigh he closed his eyes yet again and let the bird song take him away. 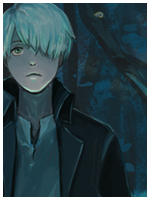 Rie was singing a song. Away from the people, away from her servants and away from everything. Her voice carried all the bravado of a nightingale, her DNA was thriving to sing a song. Delicate fingers strummed a lullaby upon the harp before her. Her voice rose and fell to a tune she had created.

"The sad bird sighed,
His wings felt heavy
He had nowhere to rest his head~"

A note rung out softly, while Rie continued to serenade the air.

"The song he sang was for him alone~.
What could he do~?
Where was he at?
In a sea of sorrow
He sings all alone~.
One feather for his love
One that floats to heaven
Where she will wait."

the song grew and fell. Her words circled as she continued carrying each note.

Slowly the song drew to a close and only the harp was left playing. She caressed the harp lovingly, simply humming the tune to her previous lyrics. the inflection of each note was that of a sleep-inducing song. Even she felt the calmness, though not as much as most people would.