Whoever invented alarm clocks needed to be hanged, right alongside the bastard that had invented ungodly hours to make them go off, and hangovers that disagreed with both elements. A group hanging. At their own stupidly early hour, just for the sake of justice. Violet eyes sqinted and glared hard, successfully mimicking their younger match as Anouk stared down her most hated enemy at the moment, auburn curls messy and sticking out everywhere. It was Sunday morning, and the pub was closed. She didn't have work, and today she wasn't planning to run errands or drown in laundry, or any of the other ninety-million unfun things that just went with the territory of motherhood. Today she'd promised to take Csilla out shopping, and had made the unfortunate mistake to asking her eldest to wake her early enough so she didn't sleep in too late.

However, Anouk had had a particularly rough and unfun day the day before she hadn't planned on, and there was a fair amount of vodka that made its way into her drinks before coming home, and possibly a bit more schnapps than she'd intended to drink. At least Anouk could attest that she was a pleasant drunk, even if she distinctly recalled her brother looking rather miffed. She'd have to apologize later. But for now, her head was punishing her plenty, and that sickly minty afterburp declared with the deadly subtlety of mouthwash from hell that the schnapps was taking its revenge. Ugh. Anouk stretched out, her arm reaching as far off the side of the bed as she could without actually leaving the bed or the sheets she was tangled in while trying to grasp the little folding alarm clock that was still beeping away, hanging from the bedroom ceiling, just out of reach.

"Little shit," Anouk groused, stretching as much as her body would allow, the bartender determined that she could grasp the damned alarm clock, pull it free, turn it off, and return to sleep. Dammit, it shouldn't be this hard! And whose brilliant idea was this, anyway? There were only two possible culprits: Kitaro, or Elastor, unless they were in on it together. Then Anouk was just doomed, surrounded and hopelessly out-glared. But someone was a rotten little mastermind and sick puppy. This was cruel and unusual! Anouk's hand swiped the air, fingers and nails curling like a cat's claws trying to grasp some stupid teasing feather on a string. She swiped and swiped again, never once admitting to the fact that if she'd just stood up and then grabbed the damned thing, this would have stopped being an issue like forever ago. But then she'd be totally awake and out of bed and bed was so nice and warm and her head felt like shit and was today really Sunday? She'd told Csilla they were on for Sunday, but maybe this wasn't Sunday yet, and some new day had been invented and wedged itself between Saturday and Sunday. Hangoverday.

Just as the alarm hit its angriest, Anouk finally grabbed ahold of it, her face momentarily lighting up in victory before the sudden realization kicked in that more than half her body was off the bed and not supported by anything, and gravity was rather against her, Anouk crashing onto the floor in a pile of sheets with a heavy ka-THWUMP! Dammit. She'd lost. Siiiiiigh "Fiiiiiiiine. You win, you win. I'll get up." With a groan, head throbbing, Anouk pushed herself upward. Her hair was a mess and unpresentable. The oversized tshirt and boxers she had been sleeping in were the least feminine thing in the world, even though the little paw prints all over the boxers were beyond cute. It was still ass o'clock in the morning. She had time for breakfast and making herself into a quasi-human before Csilla would get there for their little adventure.

Anouk trudged out of the spare bedroom she and her boys inhabited, running a hand through her hair as she stepped out of the hall. Kitaro and Kenta were already up. God, to be that young and not ever be tired. Cartoons were running across the TV, Ken glued to Sesame Street as they ran the clip that was a giant pinball machine that went over numbers. Classic. But, Nu could count to ten already, and presently she didn't need a refresher; she needed breakfast. And coffee. And a cigarette. And a shower. And maybe then she could officially start her day. Kitaro sat at the table, small legs swinging back and forth idly as he worked on the maze printed in the comic section of the paper. He put his crayon down, quickly scampering from his seat to get another bowl out of the dish strainer and filled it to the top with Honeycomb. Mama needed a good breakfast, and this was good, right?

Crispy cereal pieces fell over the edge as the bowl swelled with milk, Anouk smiling tiredly, appreciating that her son was at least trying to look after her. He was getting bigger by the day. Maybe if she squashed down on his head, Taro would stay little. He beamed up at his mother, watching intently and waiting for her to start eating, as though that were just enough approval to make his little universe. Anouk took a lazy mouthful, her headache wondering if it disliked the hangover or crunchiness more. "How's your breakfast, Mama?"

Crunnnch. "Crunchy." Taro smiled, then paused a moment in thought.

Crunnnch. "Crunchy." Yup. That about summed it up. "Though you really could have let me sleep a bit more... Csilla won't be here for a little while." Kitaro nodded, going back to his maze, red crayon in hand. He'd decided he kinda liked Unca's girlfriend. She was pretty and made good food, and had lots of art stuff so that was cool, and she was in the military and an alchemist and could make really neat shadow puppets, and that was awesome.

Kitaro reached across the table for his mother's phone and poked at the screen a few times. "Na-uh. Miss Csilla sent a message, Mama. This says she'll be here at nine-three-zero." Anouk sighed, taking the phone and another bite of breakfast.

"That's nine-thirty, Bug. And I guess that means she'll be here soon... But we won't be gone long, and you and Ken and Ela can have some fun. It's nice today, maybe he'll take you both to the playground if you're good." Playgrounds were always a good bet since the boys would do almost anything to get to go, even if it meant broccoli. But 9:30 meant Nu had enough time to finish the massive bowl of cereal, shower, do her makeup, and inject coffee intravanously before the blonde showed up. School had started back, and with the current crisis at hand, stores were desperate to keep sales numbers up, so that meant that end of summer sales were just dripping from the stores. Sundresses, makeup, and anything was out there and cheap, and cheap was great. And maybe she could get a jumpstart on buying some things for Ela and the kids that they didn't need just yet but would soon.

Crunnnch. "So, whose bright idea was it to rig the alarm like that?" Kitaro said nothing, and didn't even look up, but the wicked little grin of his said it all. God help Anouk as her tiny mastermind grew up; she'd be in a world of trouble. 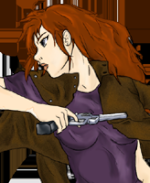 Morning was a fun time of the day. Sometimes. Really depended on the day after all. Monday mornings? Not so good. Morning after a late night with little sleep? Even worse. But a morning that led up to a day of shopping and quality time? Pretty great. Csilla had been up since about 6am, though not quite intentionally. It was one of those days where she woke up before her alarm and couldn't go back to sleep. It happened occasionally, but today she took it in stride. She went to the local coffee shop and got a delicious iced caramel coffee before going home and cooking up a nice breakfast of eggs and sausage. Then she had time for a leisurely shower before she had to be out of the door and heading to the train station. She was off to London for the day to see Anouk.

Csilla really couldn't complain about her boyfriend's sister. She had been an amazing support the past few months, one that Csilla was grateful for. After losing Shula, Csilla was hurting for a female companion to shop with and gossip with stupid things about. Elastor, while he didn't mind the shopping too much, did not gossip. Anouk's little boys had helped too, in their own way. When Elastor was working late (Anouk obviously working nights already), Csilla would come up to the city to babysit. Or sometimes she and Elastor would watch the boys together. She really loved it. The two of them were so sweet and loved games. It made Csilla happy and sad at the same time to play shadow puppets, recalling when she used to do it with Shula. She brushed off those thoughts typically, framing the thought process as practice for her alchemy. In her new position, she didn't use it as much, except for recreational purposes. She only hoped she wasn't getting rusty with her various skills. Maybe she would have to take the time to practice...