A Wild Ride To Nowhere

A Wild Ride To Nowhere

Alex walked through the streets of a city in carraig. He really had no true business here. He had a meeting in a prison as he was passing through. He wanted some info as no info was unimportant. He visited the prison an hour later and after a few hours he got out and wandered the twisting an turning streets of Carraig. He walked into a coffee shop and as he walked in he ordered a coffee shop with a written down translated peice of paper of his usual order into creig. He then walked out after gettin his coffee. Running his hand through his dreads he sighed and mumbled about troublesome countries with different coffee flavors. Taking a sip he nearly spit out the coffee. It tasted like crap compared to what he was used too. Taking a step back in he grabbed sugar and a lot of it before walking out again and going to the train station he needed to get to the other side of the island some how.

Ah Carraig. An island just west of Creta that made a beautiful attempt at remaining neutral throughout the wars that plagued the mainland. To its credit it had so far been succeeding in that endeavor. In fact several citizens of the mainland countries barely knew a thing about Carraig outside of its neutrality and the fact that it sold arms to other countries. The people were quaint, and though it was not a subject that the Ishvallan currently walking along the streets raised often with most, the people of Carraig were also faintly delicious.

The irony of visiting a peaceful island nature and committing a small group homicide was not lost on Icarus, though frankly it had not been entirely his fault. He had wandered into something of a dark alleyway the night before, a small group of thugs had tried to rob him of his possessions, and he had succeeded in turning the tables and robbing them of their souls. Fortunately Xanthus was not in the habit of being a messy eater, so that by the time the authorities had arrived there had been only a little bit of blood. No need to make a new officer lose his dinner right? With the thought of his previous encounter keeping him slightly entertained, Xanthus wandered towards a train station without really paying much attention. Two swords seemingly made of obsidian gleaming on his back brought him some attention, which was then quickly averted when his admirers glanced down and saw the two enormous pistols that he wore on his waist. Wearing the darkest sunglasses possible and loose fitting clothes made of the darkest cloth imaginable, Xanthus looked to be a vacationer straight from the deepest pits of Tartarus. The irony behind that was not lost on his either. As his sandles covered feet stepped into the area of the train station, Xanthus looked around, not really knowing what to expect at such a place. Eventually his eyes landed on someone who probably like him was not from Carraig; he looked much different than most of the people staring at him. Sensing that perhaps a new source of entertainment had been found, the Homunculus stepped lightly towards his fellow foreigner with a small smile. 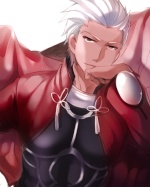 Looking up as he found his way to find a ticket booth. Alex looked at the routes to his destination and decided the lon g way might give him some time to finnish some compositions he was working on earlier. so as he turened only to bump into a male. as this happened the male tried to pickpocket him. as the male went about his buisness Alex looked around for his state alchemist pocket watch and couldnt find it. the theif was running off towards the stations exit and he cursed.[wip]

It seemed that Xanthus's foresight had been worthy of a commendation. As he had been walking towards the man, another had been doing so at a much faster pace. The latter had gotten to him first and with a nearly casual ease had swiped a silver pocket watch almost without being noticed. Almost. The man who had just been robbed turned and cursed as he noted the theft, but he might as well have not bothered at all. Pride smiled with a predatory look as he began to chuckle to himself. This would be hilarious!

As the thief began to think to himself that he would get away without a single consequence, he tripped seemingly on thin air that moved, and took a rather nasty spill to the ground. The only thing that kept his face from meeting pavement was the timely intervention of an Ishvallan wearing loose fitting black clothing and shades so dark that his eyes were unseeable. An arm held the thief up with no visible effort while the other hand was kept in the man's pocket. For some reason the Ishvallan gave the thief a feeling that went beyond 'the creeps' and went to bordering on fear. Perhaps it was that smile that he was giving him as he said in the clearest speech of Carraig that the thief should be more careful. After having thanked the Ishvallan for keeping him from falling to the ground, the thief kept running away from the train station. It would be several minutes before he would realize that he was missing something important...

Xanthus watched the thief disappear outside the train station and withdrew his hand from his pocket, bringing a silver pocket watch out along with it. His expression of triumph and amusement was readable even with his sunglasses on, because he was smiling rather similarly to the Cheshire Cat as he resumed his walk towards the State Alchemist. As he got nearer, he would wave the hand with the pocketwatch in it, letting the light bounce off the device and shine brightly around the area.

Alex would look around silently cursing as he looked for the dirty little pickpocket who stole his watch. He swore that when he got him his face would no longe look like a human being. He then saw a glint and looked at the man holding up hos watch as if he was coming over returning it. He turned and headed for the man in a holdin his watch. As he approached he made note to grab a gourd from his jacket and move it closer to where he could reach. He then said as he was sure to be close enough "Hello I believe you have something of mine and I want it back"(WIP sorry it's late had a lot to do in school

Even through the highly tinted sunglasses that he was wearing Xanthus could see the light bouncing from the surface of the pocket-watch. It's silver-white rays of light caught the attention of many a traveler as they navigated the ways of the train station on their ways to their separate destinations. Entertaining himself with the State Alchemists's prized possession reminded Xanthus of a time when he himself had been a State Alchemist. The Infinity Alchemist, one of the best in all of Amestris. Ah but those had been some fun days indeed. Transmute something here, show off the pocket-watch a little bit there, create and destroy at will and pleasure...

The Homunculus was brought back to earth by the memory of the fact that he had restolen the watch for someone else, a someone who was now headed towards him with a walk that suggested a purpose. Pride noticed that the man shifted something within his jacket and smirked rather obviously; truly he had nothing to fear from any weapon anymore, so he simply smiled at all weapons that were carried around within his presence. As the alchemist got close enough to speak to him, he mentioned that he wanted his watch back, an almost unnecessary sentence. With a flourish the Homunculus allowed the watch to hang by its chain as he lowered it almost reverently into the alchemists's hands with his smirk still in existence.

"Now now my dear State Alchemist, you can not go around to foreign countries and misplace one of your most important possessions! It does your station little credit." Xanthus spoke in perfect Creig, even including an accent so flawless that he sounded as one whom had been born and raised in Carraig. Of course his smirk persisted even as he did so, every word carrying that facial expression's meaning in its sound.