Central City. The city at the centre of the country that thought itself to be the centre of the world. The catalyst for cycles of disaster throughout the centuries yet the crowds of people all clustered into the streets, stores, and trains like insects in a tunnel, just mindlessly carrying on as if nothing were awry.

Raistlin watched the traffic flow down the highway like ants all heading to an unknown destination, driven by the invisible forces of society they knew not themselves to be subject to. He looked on upon the conglomeration of people and vehicles from the overpass above; his dark red eyes scrutinizing them closely despite his mind being focused on intangible thoughts.

He was here in Amestris, so far from where he started, yet he did not rightly know why had come so far and what for. It was if his mind was not rightly his own-- something he did not entirely doubt considering the abysmal state his mind had been in since he had awoken...awoken from....
Raistlin grimaced as he clutched his head with pale hands draped in tattered gloves. There it was again, that caustic sensation the wracked his head whenever his thoughts lingered upon the empty gaps in his memory. He had already attempted to shut of the pain receptors througout the flesh within his skull but it was to no avail. The pain...it was not a physical sensation, he decided. Perhaps it was a mental barrier imposed upon him by himself or another force to prevent himself from accessing portions of his own memory. A thousand caches of information were stored away in his mind. He could end life by willing it, he could shape and twist it to his desire, he held endless troves of information-- of research and results of theories and practices of the deepest recesses of understanding of the human body. All this knowledge...it was not commonly known, he was certain of that. The acquisition of such complex data was laborious... he felt that was the innate nature of it within his own sense of self, despite how intangible and fractional that seemed to be. Yet, he could not even recall the process of which he went about this extensive gathering of information and experimentation. The end was there but the means were not. This was the greatest anomaly in the puzzle that Raistlin found to be his existence. He could not rightly recall any events in his lifetime-- it was just as if had awoken for the first time there on the cold floor of that dimply lit and damaged facility. Yet he was an adult, he was rightly conscious and aware of his surroundings so it was far from his mind being obliterated entirely. He could only surmise that he was suffering from some strange form of amnesia. Despite all his biological and medical knowledge he could summon no solution to this crisis to mind.

Yet some imponderable instinct had driven this disoriented fractured vessel of a man to Amestria's Central City. Some....indescribable feeling beckoned him to this unfamiliar country, as if the answers to his identity may have lied therein. So he walked. From Kyoto to Central he walked without pause through the foothills and mountains of North Aerugo, through the rugged and hot terrain of South Amestris and into the concrete and steel labyrinth of Central City itself. His clothes revealed just how subjected to the elements he had been despite the healthy and untouched state his body was in. His gloves were ripped and torn, his pants full of tears and holes, a white lab coat he wore looked little more than a dirt stained tatter of cloth draping from his shoulders. He had not eaten in weeks. He had not slept or drank in weeks. His body hadn't such pressing need for such things as others did-- his own handiwork no doubt, though he could not recall why he imposed such an alteration upon himself.

And now here he was in Central without a single hint as to what may have existed here that he would innately seek without coherent reason and with nothing to show for his trek.

Raistlin remained in festering silence as the sky began to dim and the sun dipped behind the distant skyline of the city's centre; splashing the horizon with vibrant hues of red and orange. Perhaps the countless souls hurrying in every direction saw meaning in their surroundings, thought the alkahestrist. To him, however, it was an endless, empty nihility. 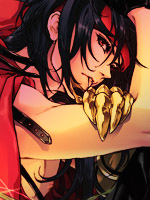