The Cake is a Lie

The Cake is a Lie

"Well, Franklin, the last time me and Gavin met was at the festival, and I need to break the ice a little." Rachel explained. That was not her reasoning. Her reasoning was that it'd be funny as hell. Plus, it didn't hurt that she neglected to tell him that she was coming, though it was for important reasons. She just wanted to see the Silent King's face when she struck. The rumbling of Samson's steady plod rocked her back and forth, the well-trained creature carrying his owner to her destination. However, Franklin, back in Creta, was screaming down the phone.


"Got to go, I think I'm here." Rachel said, before hanging up on her bouncer. Lifting the lid above her slightly, she peeked up the driveway that Samson now led her. The home of Gavin Etheridge himself. Now to measure just how much fun he was. "Samson, down boy." She called, and the elephant dutifully obeyed, placing the container she hid in gently on the doorstep. "And ring the doorbell, that's a good boy." The elephant obliged, his trunk pressing into the little button on the side of the door.

The first thing anyone opening the door (presumably Gavin) would see would be an oversized cake, and behind it a 12-foot tall elephant standing patiently, trunk swaying from side to side, a gigantic shawl over its back bearing the Cretan flag. However, when Rachel was sure that Gavin was there, she turned on the mini-radio on her person and she burst out of the cake...

... and, as women hiding in huge cakes are wont to do, she wasn't wearing a whole lot.

As confections went flying, the eccentric queen of Creta held a huge grin from ear to ear. All she wore was her panties, and on them was clipped a small radio playing 'Let the Four Winds Blow' by Fats Domino. Other than that, she was completely naked besides her smile. As she popped out of the top of the cake, she let out a great bellow; "SURPRISE!" The moment she was out in the open (for lack of better wording) she reached back into the cake and pulled out a party popper, before pulling on the cord and letting out a shower of confetti to rain on the Silent King's head. She then leaned on the side of the cake, toying with the icing that sat on the only actual sponge part of the cake as she held a short silence to allow the king to adjust.

"Thought I'd drop in for a visit while I was in the area. Given the tension that's been going about since the festival, I thought you might need an ice breaker." She said finally, after a good minute. "Just thank your stars it's not Hans in this cake; I know it's not humble of me to say, but I probably look way better than him."

"Also, mind if I use your shower? It's hot in this cake and I'm starting to sweat like a pig."

It wasn't too often that anyone in Carraig, let alone Palace staff, had the occasion to tell the King that there was an elephant at the door. Hard to believe and tragic as it was, the occasion just didn't come up too often. And yet, one was there, right now, at the main door of the palace. With a giant cake, no less, and bearing a shawl that looked like a giant Cretan flag. The doormen were puzzled. The guards were in disbelief. Artemis seemed ready to shoot it. And Gavin was simply wondering if everyone was in on a large-scale joke since pranking the King wasn't something commonly done. Despite the safety concerns, Gavin really did want to see for himself.

And they were right.

Standing there was an elephant, patiently waiting with a large cake that was.... playing music? Gavin stood there silently (though there werw few options for the man, really), somewhere between bemused and a little concerned. It certainly wasn't his birthday, and why on earth a Cretan flag? Dietrich wasn't one for odd jokes, and Trojan elephants just didn't have the same ring to them. Turning quickly to his guards, Gavin began signing, his attention divided between the rather odd delivery and the guard. "What is this? Confess, whose idea is this?" The guard shook his head frantically.

"It's not us, Sir, honest!" Gavin looked back to the cake that played music. Some Cretan band that occasionally came up n the radios here. He took a tiny step closer when suddenly the top of the cake burst open. Armed guards reacted instantly, weapons loaded, aimed, and ready to turn who or whatever it was into Creig cheese. But no bullets ripped through the air. "SURPRISE!" Gavin was speechless, the moment beyond comphrehension as Rachel yanked at a popper to rain confetti and streamers onto the King's head.

Rachel. The fucking Queen of CRETA was here. Unnanounced.... in a cake. Topless. With an elephant. The King couldn't help but pinch himself as vague senses of rationale returned, telling him that this moment was most irregular and surely was a strange dream- too much spicy food before bed. He blanched as he realised that sadly, it wasn't. MotherofGodQueenRachelwashereandshewasNAKED!!!! The news would have a FIELD day with this! Rosaleen would have a shit fit!!!

"Thought I'd drop in for a visit while I was in the area. Given the tension that's been going about since the festival, I thought you might need an ice breaker." Oh God, tension? Yes, the festival had made relations a bit terse between Carraig and the rest of the world, but unless they knew about the bomb, to the rest of the world that was pretty normal of the slightly xenophobic, neutral, and heavily armed nation. What on earth would they say about the tension from this little adventure, hmm? "Just thank your stars it's not Hans in this cake; I know it's not humble of me to say, but I probably look way better than him." .....TRUE, but boy wouldn't Hans get a great giggle out of this later. Over a bottle of scotch or three. "Also, mind if I use your shower? It's hot in this cake and I'm starting to sweat like a pig."

Finally Gavbin grabbed for his speech aide, quelling his urge to rant until his ears bled as he rather doubted it'd get him anywhere other than vexing his surprise guest. He typed frantically, motioning for guards to block the driveway in case of sudden paparazzi. "What an unexpected surprise," the mechanical voice chimed out in an almost annoyingly perfect Cretan accent. "Welcome Queen Rachel... I'll have someone show you to a shower." Now there was a welcome sentence that rarely came up. "And someone to attend your... elephant." And that was a sentence that came up even less. He was beginning to wonder if Rachel and Wolfgang were related. 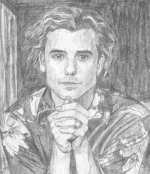 Rachel could only giggle like a hyena back at Gavin and his more than flustered reaction. The guards even continued pointing guns at her as they moved around her to guard the door, as if they were waiting for the topless queen to suddenly explode or something.

"What an unexpected surprise," the mechanical voice chimed out in an almost annoyingly perfect Cretan accent. "Welcome Queen Rachel... I'll have someone show you to a shower." The queen simply nodded, before standing up, snapping the elastic on her panties.

"Don't worry, your majesty, I'm decent underneath, so long as I know where it is I can make my own way." She explained, getting out of the cake. "Still, I almost wish you could've seen the face you made; it's worth a stunt like this, it honestly is."

"And someone to attend your... elephant." At this, Rachel laughed. Even Gavin's speech aide seemed to slow down.

"Don't worry, I'll sort Samson out." She said, before looking back to the colossal beast. "Samson! I'm gone now, I'll be back!" She barked, and as if on command Samson simply fell asleep; he was a disciplined, well-behaved creature... clumsy, though. Whenever Rachel was around, Samson just liked to sleep... wherever he was standing. As the words passed Rachel's lips, Samson simply keeled onto his side, slamming into the ground and practically annihilating the flowers on the right hand side of the driveway. Rachel bit her knuckle mischievously, before looking back to Gavin. "Well... to be honest, I think roses would go better there anyway."

Rachel made no comment as she was led to a shower. She didn't feel like she had to; a queen's body was comment enough to explain. Besides, it was highly unlikely that anyone in the palace didn't know at this point, so there was no point pretending that it didn't happen. She was polite and didn't draw attention to it, but she was only polite to get a quick and easy chuckle at the completely disarmed nature of the people she saw on the way to the shower.

"Sorry if I'm intruding on any plans you had, Gavin; I probably should've phoned ahead, but this is one of those things that was spur of the moment. I had something to say and needed to say it in person." She looked back to the so-called Silent King, giving him a warm smile, and her tone became a lot smoother; turning from the mischievous, eccentric night club owner, into the calm, understanding queen.

"See, I know that Carraig's a country that almost prides itself on its diplomatically neutral nature, and I doubt you want to change that; it's a complex and violent world... not having allies or enemies is probably the safest option. "Death to the mainland scum but leave us your money" is how the saying goes, am I right? But after the festival I think it's pretty obvious that there are people out there who want to change that fact." She explained herself, her voice like an adagio from a cello; soft and deep and comforting. Not demanding or propositioning, simply guiding Gavin into the state of mind she wanted him in. Letting him know that, for all her oddities, she was a friend to him. "And I want to be the one to ask you what I'm about to ask you; Dietrich would just demand an alliance when that isn't really what Carraig or, I suspect, you want, and anyone else would probably ask for the same. So far as I can see, Carraig seems a little on edge about the rest of the world. Understandably, mind; and besides, your weapons manufacturers would politically destroy you if you made an alliance with one nation."

Rachel Ascot turned her dark eyes to Gavin. Not dark like death, but like coal; a warming, soothing feeling flowing from them, as warm as her tone, as warm as her smile. "So, if you're interested, I've got a better offer than a straight-up alliance, if you want to hear me out."