There was someone knocking at Toss Ivanova's door. Unfortunately, no one was answering.

The person had tried the doorbell, but attempted to add urgency by knocking as well.

Usually the person in question didn't bother to enter a house by this method. Even those highly advanced locking mechanisms that Toss had installed for some reason (considering that he was Greed, he probably just wanted to keep his stuff really safe). However, Greed was one of those few people that the person wanted to be in relatively good terms with, despite of the person who happened to be his latest incarnation. As such, he would try the "normal" method first. And then he would break in.

"I guess he isn't home after all", Envy finally thought as he took another bite out of his slice of chocolate pie. "What a shame". Which would leave him an option of breaking in. The only problem was the one related to that noise that could be heard from the other side of the door. It was Toss' pet. Envy was still surprised how he managed to keep one, considering how most animals reacted to homunculi. But it seemed that a pure one was just too much for such animal. Really problematic part was that it wasn't enough to scare the bird away, as it was used to the stone. Instead, it acted aggressively.

So entering, even in a disguise, wasn't an option. Envy couldn't do anything to Toss' bird when he would get inside because of possible injuries for both him and the bird. First one would upset him, second one would upset Greed. "How come being considerate is so fucking hard?" was Envy's question to no one in particular as he finished the slice and turned around and headed towards the elevator. He could always come back later.

It should be mentioned at this point that Envy was in his current default form, as Toss had met him while he was donning it. It should cut out the part of dialogue where Envy would have to make it clear who he was.

a) He was a bit taller and looked older

b) His hair was green (although this wasn't too obvious with the hood on).

Explanation for this was that where people change clothes as their chance of fashion change, Envy changes structure and appearance of his body. These current changes were one that he found appealing and which would be incorporated in his new default form. Envy was mixing them with this form to make it easier for Toss to recognize him in the new one.

Another slice of pie was taken from the box as changing numbers showed that the elevator was, in fact, already coming up.

Besides, there weren't any risks in doing such a mix-up, as no one else who lived in Carraig had interacted with him in that form.

As Molly ascended in the small and barren room otherwise called an elevator, she could have sworn she could smell chocolate pie. Which was odd, but not unheard of; she had a very keen sense of chocolate pie smelling ability! At any rate, though, she didn't particularly expect to be greeted with a somewhat familiar face wielding a pie, as the lift hit the top floor, where Toss' apartment was located. Indeed, she hadn't anticipated either the man who'd be before her momentarily, nor the pie in his hands, today.

Rather, she had anticipated a visit to Toss, because she had nothing to do, and hanging out with Toss was... Well, it was certainly never boring! And Savvy's simply the most adorable albatross ever. Not like albatrosses competed to see who was more adorable, but still. As she pondered thoughts of potentially putting Savvy in a tutu and a cute hat, the elevator arrived at the top floor, and the door slid open. Stepping out, she did indeed see that familiar face, that of the chocolate pie guy in Amestris that time; Envy, she recalled, hearing Toss or King refer to him by such a moniker. 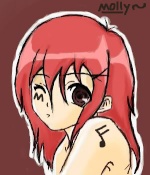 Doors opened as the elevator stopped moving, having reached that certain floor. At the same moment, Envy's act of eating stopped as well. Yes, there actually was someone who could recognize him and lived in Carraig. And she was standing right in front of him.

But then he thought that there was a slight possibility that, perhaps, she didn't remember him. It was possible. They had only met once, in a foreign country. So perhaps she...

...scratch that, she did recognize him. But as it could be seen from her reaction as she left the elevator, it wasn't too much of a surprise. Just a bit disappointing.

What was surprising, however, was the hug. It was also slightly unpleasant. Envy didn't like hugs. This should be obvious to anyone who has even the slightest understanding on his real personality. This didn't include many people though. "Maybe I could try to claim social awkwardness".  "So what brings ye to Carraig?"

This was the moment when Envy actually looked at Molly. But he didn't answer. Instead, he took one more bite out of the slice of pie that he was holding. He didn't exactly want to talk with her. She had no value to Envy in any way. In fact, the fact that she was Toss' friend was only a hindrance, as that would mean that he couldn't do anything "fun". That would upset Toss and Envy didn't want that. He swallowed the food in his mouth as his period of silence ended.

"What reason I could possibly have, considering that I'm right in front of Toss' apartment?" Envy nodded his head to the door's direction. "He's not home though", he continued, sighing in the process. "And judging by the sounds, the bird doesn't seem to like me either". It wasn't exactly necessary to describe the situation that much. However, Envy was hoping that the girl would know if there was a way to get around the bird-issue. He could even reinforce the positive behavior with his pie. And if she didn't...

...well, that wasn't exactly clear to Envy. So he would just hope that there was such a solution.

Hmmm... For some odd reason that Molly simply just couldn't exactly place, Envy, her fellow comrade in the field of chocolate pie loving, seemed... WELL. Somewhat unpleased that she had arrived. PFFFT, AS IF. He obviously loved her and enjoyed her wonderful presence! He just had a tiny difficulty in expressing it with a ssssssssmmmmmmmmmiiiiiiiiiiiiiiiiiiiiiiiiiiiiiiiiiiiiiiiiiiiiilllllllleeeee!!!~ No matter, he'd eventually learn how to smile! IN DUE TIME. Anywho, she spoke words to him, and gave him a GREAT BIG HUG, to which he responded by eating pie. A very reasonable response, as eating pie is the answer to most of the world's problems. Chocolate pie is, in fact, culinary duct tape, in a sense. Except it actually CAN fix ducts, unlike duct tape, ironically.

As she pondered asking for some of his pie, he answered her question, which, admittedly, WAS somewhat obvious. Though he could've been in Carraig doing OTHER STUFF, and just HAPPENED to be at Toss' apartment. Maybe. Likely not, but still! Worth asking!~ "Oooohhhh, okay. Tha'd make some sense, I suppose." He went on to further elaborate why he was simply standing around. It seemed Toss was away, which wasn't too uncommon an occurrence, as Toss sometimes left without telling anyone to go do... Well, whatever it is Toss did. She sometimes had no idea what it was he did besides flying.

And apparently, Savvy was trying to keep poor Envy at bay? Molly laughed. "Ah, he's just being a good watch-albatross. Probably nothin' personal, hehe~" She reached into her pocket as she stepped forward, withdrawing a key, then reached into a bag resembling a purse, somewhat, and withdrew... A small trout. Odd, but sure, why not? "Could come in and wait a bit fer him, if ye want to~ I've got a card fer his place." It had certainly taken a lot of pestering Toss about how often she came over and his door was locked, but he had eventually given her a spare key card to his apartment. Would totally come in handy.