Shannon Manor was quiet. Blessedly quiet. Silence was never a more appreciated sound to the princesses' ears. True enough, the actual manor was not silent. But the drawing room where Maria had tucked herself away was silent as the grave. Some of the staff were in the kitchen preparing tea and others were doing whatever it was they needed to be doing. The reason for the quiet was also the reason for Maria's carefully concealed joy: Fiona was gone. Her horrid mother had gone off on a weekend trip to a spa on the coast. It had been easy enough to wiggle her way out of attending. She had pleaded that Brendon had promised a visit and it placated Fiona. However, that wasn't exactly true. Maria had invited him for tea for this day only. Yes, surprise, surprise. The princess of Carraig had lied. Lying was one of her many talents, although she demurely called it “good acting.”

Maria was lounged on the chaise in the corner of the room, an arm thrown dramatically over her eyes. It appeared as if the young woman was enjoying a cat nap, when she was in fact reciting. Silently, of course. Couldn't have the staff snitching on her to her mother. MacBeth rolled through her head, line by glorious line. It would do enough to amuse her mind while she waited for Brendon to arrive. 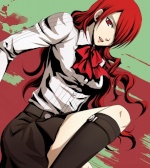 Tea whith his sister... It was something Brendon both enjoyed and despised at the same time. He enjoyed it because he didn't often get to spend time with his family or his sister in particular, after all their mother didn't let the young woman do much or go anywhere often. So when he came back home he honestly enjoyed trying to lighten the leisurely that was her life at home, though for obvious reasons it wasn't always as successful as it could have been. After all... There was very little he could do to better her situation, aside from bring her new books and the like. He hated it for the simple fact that it always seemed like his sister never wanted a thing to do with him for one reason or another, it always seemed as if he was bothering her with what she sometimes called 'Trivial matters'. Still It could have been much much worse, after all she never really yelled at nor demeaned him in any direct way. Though of course they did trade barbed insults every now and again.

He made his way through what had been his home for most of his life, going o the sitting room that they had always used for tea when they had been younger. It had a subtle air of nobility to it, an understated elegance that spoke of wealth more then any ostentatious display of gold and silver ever could have. He opened the door slowly, the soft creak of its hinges bringing a smile to the young princes face. His boots clacked softly as he stepped onto the carpet and he looked about finally spotting Maria sitting in a corner apparently sleeping." Hello Maria, are you actually napping or just pretending so that the staff wont bother you?"

“Hello Maria, are you actually napping or just pretending so that the staff won't bother you?" Maria's eyes snapped open, although her arm remained, hiding the fact that she did so. She wanted to lash out at her brother, accusing him that he had no right to assume what she was doing. If she didn't want to be bothered, then she would say so. Simple as that. Yet, she knew that today of all days, she had to play nice with Brendon. Or rather, pretend to play nice. If she was too sweet, he would know something was off. She had to be a bit snippish, for consistency's sake. She lifted her arm up, blinking once or twice. Her other arm joined her other, stretching above her head. She gave her brother a wan smile. “I must've dozed off. Someone was clearly late.”

She rose from the chaise, adjusting her knee-length gray skirt. She then straightened her light blue v-neck tee. She gestured to the small table that had a small collection of tea cakes on it. They had not been there long and Maria went over to the wall near the door. The manor had been updated to have a basic intercom system, rather than the usual bells to the kitchen. She hit the buzzer. “Tea can be served now.” She removed her finger and heard a servant reply. Moving away, she went towards the table. “The tea will be here shortly. Sit, please.”

“I must've dozed off. Someone was clearly late.” Brendon let out a little chuckle and shook his head with something that was to close to a smirk to be good for his health. "Late sister dear? I think not. I arrive just as i mean too!" He moved towards the table even as she rose and gestured to it, taking one of the tiny cakes in hand before turning his attention back to his sister. “Tea can be served now.” He could only sighs at Maria's tone of voice. She had always been a demanding individual, and unlike fine wines it hadn't gotten better with age. “The tea will be here shortly. Sit, please.” He nodded before rolling his eyes and giving his sibling a tiny if mocking bow. "Well then, as the princess commands." Then with a flourish of his coat he Brendon moved about the table and pulled out his sisters chair before letting him self sink gratefully into the one opposite it.

"So sister dearest, how have you been fairing under mothers stifling thumb?" The cake that he had been holding since almost the start of this little conversation finally finds its way to his mouth. "I have to wonder why she insists on treating and caring for you as if you where in fact some sort of rare rose... She should know better then that given her lack of a green thumb." The servants came in with a tray of tea and set it gently on the table and poured each of them a single cup before departing with out a single word. "Though even with that, you do seem do be doing fine for your self all things considered."

Maria gave her brother a polite smile as she sat down in the chair he had pulled for her. She adjusted her skirt again as she sat so it would rest on her legs without a crinkle. "So sister dearest, how have you been fairing under mother's stifling thumb?" Maria internally grimaced, but her face remained well composed. Thumb was a bit of an understatement, as far as she was concerned. More like a mallet. "I have to wonder why she insists on treating and caring for you as if you where in fact some sort of rare rose... She should know better then that given her lack of a green thumb." Maria allowed herself a tiny smile at this comment. Their mother did not have a pechant for gardening, as she wished. Luckily, she was able to hire as many gardeners as she wanted to keep the manor grounds beautiful. The pleasures of royalty, Maria supposed. "Though even with that, you do seem do be doing fine for yourself all things considered."

Now a small chuckle escaped her lips as she scooped a small spoonful of sugar into her tea. “Practice, brother. Practice.” She let the tea sit and cool for a moment as she also reached for a cake, taking a respectful nibble. Sometimes she hated the breeding her mother had metaphorically beaten into her, but it was something as natural to her now as breathing. “Being a royal princess of Carraig is a restrained life, despite the day and age we live in. Mother's thought process rests somewhere in the halls of Medieval Carraig.” Another nibble and then she spoke again. “Princes seem to have all the fun these days.”

A small and sweet chuckle came to his sisters lips, almost as sweet in fact, as the sugar she so expertly stirred into the tea. Unlike most though he knew that her outward sweetness was but a lie that she used to mask the bitterness that she nursed and had always nursed since the tragic death of their father. Not that Brendon could blame her for it. He after all had been for a time consumed with the same feeling of betrayal that all children feel when their parents die. In fact even now as a grown man he still harbored some of the hurt and anger but he tried not to let it rule him. "Practice, brother. Practice.” The woman took a small dainty bite, more accurately described as a nibble then anything else. Though she rebelled against the bonds placed on her by their mother she had learned her lessons well.

" “Being a royal princess of Carraig is a restrained life, despite the day and age we live in. Mother's thought process rests somewhere in the halls of Medieval Carraig.”" He could only nod as he picked up his own glass of tea and added a dash of cream before taking a rather slow drink from it. Savoring the hot liquid  as it warmed his body.  “Princes seem to have all the fun these days.” That drew a low chuckle from the red headed prince, his green eyes glinting with faint amusment. "If you call dealing with visiting dignitaries and our own nobles fun, then yes I suppose I do." IT was rather pathetic, but those hours not spent living up to his social standing where spent attending to the various duty ascribed to him in his role as Warlord. "Thought the Games where fun at least, I was sorry not to see you there. Im sure you would have... Enjoyed the sights." He winked at her before taking another pull from his glass.[/color]