Cigars can only ever lead to brawls.

Cigars can only ever lead to brawls.

A long tuft of smoke rose into the calm blue sky, rising far above his head and drifting lazily into the deep beyond. With his back against a separating wall, the male could only close his eyes softly and carefully, taking long and deep breaths as he did so. He wore a pale blue suit, but the obvious burn marks on the clothing took away completely from everything else. If one didn't know him, they could simply call him a homeless man who, at some point, had taken the liberty of stealing this cigar from another man in order to enjoy himself. Of course, they wouldn't have noticed the rippling muscles beneath the clothing--how could you, when they were hidden by such a lively amount of dynamite? They could have seen the diamond-studded ring that he wore on his hand, if it were not in fact cubic zirconia. However, the greatest tell could quite simply have been this man's name--Samuel Hartmann III. Not just Samuel Hartmann... Samuel Hartmann the Third. Such a pretentious name must certainly show some sort of wealth, right? Of course, you wouldn't actually see it from just looking at him, and talking to him would make it even worse, right?

As for who he was, one would be wise to call him a saboteur, of sorts. In fact, he had just finished his most recent job (which the burn marks had arisen from), where he was to destroy a processing plant on the outskirts of Xi'an. Why, then, would he be sitting so casually here, smoking? Because honestly, nobody would've missed it. The plant processed weaponry that was supplied, not to Xingese militants, but Cretan gangs--the export was even completely mismanaged. Honestly, it was better that it was destroyed, or so he'd convinced himself. With a sigh, he noticed something out of the corner of his eye. A bunch of brutes, they were, all armed with some pretty horrifyingly-large baseball bats. "Ah, fuck." They looked familiar--and that's because they were. They were enforcers of the gang to whom the factory that he had just destroyed, belonged to. Goddamnit. If life wasn't difficult enough already.

With an exaggerated sigh, he stood up slowly in order to meet with these men; because he'd be fucked if they weren't after him. And as he expected, the moment they noticed him, they started walking over to him, saying something loudly in Xingese. Now, Sam didn't speak Xingese. He spoke Aerugese, and he spoke Cretan, but Xingese was out of his range. So in this, he decided to mess with them--because God Forbid that they could speak Cretan themselves. "Oi, Chinks. Get 'dis in yo' 'eads. I don' speak yo' fuckin' language, innit?" The cockney accent was on purpose. Of course... "I'm sorry, good sir. I didn't expect you to understand us. Now please, stand there while we beat the shit out of you." Well shit.

Stepping backwards, Sam noticed the baseball bat that had barely missed his nose swing out in front of him. Right. Let's do this. A quick scene played out in Sam's head. Three of the bastards. One on the left has a slight limp, but is also the most aggressive. The other two seem to be strong enough. Need to cull the flock first. Reaching into his shirt, he produced three small-ish sticks of dynamite, with two red bands. Flicking the cap and jumping back further, Sam watched as the bastard with the limp stepped forwards without a care. After that first second, Sam quickly released them at the ground before him--they exploded almost immediately after touching ground, right in front of the limper. He was quickly thrown back, dropping his own baseball bat and knocking over one of his buddies--the smaller one, unfortunately for Sam.

The man with the glasses and cigar quickly lunged forwards, reaching down to grab the dropped bat, picking it up and then quickly diving to the side in order to barely avoid a baseball bat being swung down without a care, at his head. Scrambling to his feet to escape, Sam made sure to leap back far enough to make this one count. It would take... probably about four seconds if he timed it right. Therefore, it took little effort for him to produce a small stick, with four blue stripes placed upon it. "It's the bottom of the ninth, and it looks like there's only one pitch left. The batter from Creta is ready to make his stand, and what a stand it'll be." Flicking the flint to light the fuse, Sam would then throw the dynamite up in the air. At this moment, the bastard noticed what was about to happen, and prepared to charge. "Swing, batter batter, swing." With a grin, the cigar-smoking man pulled back and swung with a powerful hit, knocking the dynamite straight forwards in a line. It spun and streaked towards the gang member, giving him absolutely no time to escape before hitting and latching onto him. All Sam heard was "Fu--", before the explosion shook the place a little, knocking the dude back. "Boom." With a grin, Sam turned away and started walking off.

He needed a fuckin' drink. 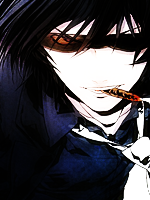 Re: Cigars can only ever lead to brawls.