Spring. After so long of waiting, the world was reawakening with the breath of life that was fragrant with newly-opened blossoms all around. Despite harly seeing herself as an optimist, there was a certain feeling of renewal that Ayaka couldn't deny that the season brought that almost gave her a vague sort of hope that this year, maybe, just maybe, thins would be different. Be better. Of course, she knew better and chid herself for even joking like that, but sometimes it was almost nice to think about. The world was changing in its endless patterns; part of Ayaka wondered why he couldn't just change, too, but then the other part of her seasoned that just as the seasons were set in their patterns, so was her father.

Heavy thoughts were shaken free with the crumbling dirt that fell from the roots of the weeds that yeilded to her gentle tugging. Fuzzy pink sleeves were pulled to her elbows, gardening gloves covered in bunnies and flowers covering Ayaka's hands. It was a nice day, and here, the world didn't matter. Didn't exist. Her problems didn't chase her here to the temple where she worked so many afternoons and evenings and free days. Nobody bothered her here, or questioned how solid her mental footing was today. Nobody knew. Nobody cared, because her problems weren't theirs, and her problems didn't exist here. For all she knew or cared, Ayaka didn't exist here.

She'd been waiting so patiently for spring and to get through the winter. Early spring was the hardest, but there was no stopping the calender. Another weed pulled free from the dirt. Her birthday had rolled around. They hadn't done anything for her birthday. Her grandfather wrote a sick note for his girl as she spent the week becoming more withdrawn. Mama never came home for dinner. Three days she'd missed from school, headaches overwhelming. The sweet way Uzuki had kissed her goodbye. Ayaka'd shut off her phone; the last thing she wanted to do was talk to anyone beyond getting her assignments. Her wrist was grabbed... her back hit... her head hit...

Ayaka jumped slightly, giving a startled cry as she fell backward on her rear. Kai didn't waste a moment to hop onto her legs and walk up to her shoulder, meowing and purring. She'd been spacing out again. Around her birthday was always hardest. But why? Why couldn't she remember so much of the accident? Why was her short term memory still such an issue? Her assignment book said she had everything, but most of the day at school.... was a blank. The only reason she knew she went today was because the assignment book said she had. She saw things, and then didn't see them, especially when nobody saw them. She remembered things but now questioned if they ever happened at all. Kai secured himself into the girl's shoulder, the bobtail occasionally feeling the need to bat at loose strands of hair that had come free from the bun held in the claw clip.

She stood slowly, gathering the pulled weeds to move onto the next patch. She'd get the weeds out, and then add in some fresh compost, and then see about planting some daffodil bulbs, or maybe some irises. There was a lot Ayaka seemed to miss in conversations and the day to day, but at least in the temple's garden, it was all okay; she'd set to her task and finish it when she did, and if she missed something, Shigeru or one of the other people working there would nicely point it back out to her. No blame, no expectation. Nobody ever minded if they saw her spacing out or talking to herself as though something were there; they'd just let her be. Why couldn't everywhere else be like this, she wondered. Here, Ayaka wasn't sick or crazy; if anything, she was a little odd, but she wasn't unwell, and she wasn't useless. So why... did it matter so much outside of here as long as she could keep up appearances? Or was she really not doing as well as she thought? Her friends saw her as a space cadet and absent-minded and a geniuine klutz; they didn't know anybetter. So why... were her father and doctor so insistent that she should go away somewhere where she'd never be seen again? She asn't hurting anyone, and Ayaka knew that maybe some day her brain would be so kind as to fill in the gaps of her memories. She wasn't crazy, she was just a little unwell. 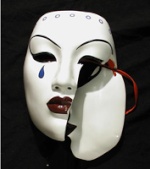 "Long and hard is the way out of Hell that leads up into Light."

It had been a year, now. And, in truth, what with the affairs at the Fort, combined with the bureaucracy of his new position under Hans, and wedding planning, then all the freelance contracts he'd been taking on on top of all that... the past few months had been busy. Uncannily enough, since his last visit to Aerugo - with a certain Miss Leblanc, the ball-dancer, whom the assassin had given, fittingly enough, her final waltz.

But in truth, Ayden had the leads, he had everything he needed to chase them all up. Carson. Juan. Dusselmitts. Koth. Joan had given him exactly what he needed to locate all of them. Names, nationalities, everything he would have needed. All the assassin had to do was punch the right combination of letters into a keyboard, or hand a certain someone a thin manila envelope filled with just enough paper banknotes to 'oil the machine', so to speak, and, whether it was a few hours or a few days, he'd have a location and a date. That would be enough.

All the extra work he'd been taking on, in truth, was to busy himself, body and mind, as much as he could. Because every time he got a moment by himself, all he could feel was regret. The scenes unfolded in front of his eyes. Heart taking his pistol. "Go!" The whoosh of the flames from above, the rifle round tearing through the wooden paneling and cutting into the flesh of his thigh. Those neverending hours in the basement as the body of his mentor - the only man he'd ever truly loved like a father - crackled and burned away above. Even if only for comparatively a minuscule moment in the grand timeline of Ayden's life, he had been helpless.

He hated being helpless.

That said, Heart was gone - that much he'd come to terms with. His inadequacies and the vengeance of his assailants, not so much - but he still wanted to at least devote something to the old man, set some time aside to show his respect. And even if he was buried back in London... Kyoto would do, just fine.

With that, he opened the door to his Audi, parked across the street. For once, Ayden wasn't dressed in his usual spectral and shimmering black garb. He'd chosen instead to don a simple, linen white shirt, loose-handing, and a pair of black slacks with some dress shoes, his silvery hair hanging down onto the worryingly comfortable shirt. He was a man of uniform - ironically enough, not being the military's - and it felt... a touch guilty to be appreciating a day in what were, for him, 'civilian clothes' quite that much.

But even if he had tried to blank everything else out, with a smile, Ayden recognised for a moment the familiar weight of the Children, transferred to variable shoulder-holsters under his shirt. He might have dressed down a touch, but there was still no way he was going anywhere unarmed. That was a sentiment even Heart could respect. He imagined that - wherever he was, in some phantom dwelling for those in the afterlife, if it so much as existed - the elderly assassin, calloused skin and creased pallor, was looking down on him now and smiling. He hoped he was.

With a sigh, he locked the car up with a gentle click and made his way over the road and into the temple. It was as detached from the hubbub of Kyoto proper as it could be, and as Ayden neared it - having only passed by once before - he could feel a suspended aura of calm around it. And as tempting as it was to shatter that with some poignant "imagery" of his own, the assassin did have limits, and one of those was shooting up a place of inner peace and... well, eponymous zen. Usually, anyway. That church job was a one-off. Probably.

He sidled into the entrance silently and quickly made a beeline for the gardens. The fresh air and the smell of spring hung around the entire temple, lingering like some peaceful bubble, but it was at its most intense in the gardens. With a smile on his face - and not the usual morbid kind - Ayden stepped out of the temple's center, and into the side garden, drawing in greedily deep lungfuls of fresh air. The thin, silvery, translucent hairs on the back of his neck all begun to stand up, one by one, in a rising wave, like soldiers on guard.

"Old man..." The only other patron of the garden itself was a small Aerugese teenage girl quietly busying herself with the place's gardening. For a moment, Ayden simply stood, allowing the gentle breezes to wash over him with a contented, pleasant look on his face - and for once, he could have been mistaken for a normal man. The assassin may have denied this as weakness - but everyone needed their moments of solace once in a while, and this was a different extreme from the usual murderous lengths the man required. Here, his memories of Heart could be kept at bay for another year. Here, he could, even if for an hour, come to terms and make peace with his long-lasting, overhanging bereavement. That smile intensified. "...you'd like this place." He murmured.