ghosts of you to my resolve

ghosts of you to my resolve

(this is most likely back dated)
Theo couldn't help but feel excited. He had planned this visit to see Ran for weeks. Had worked over time to earn enough for the flights and to go out with the other man several times. Though the other hadn't been able to talk to him much the past week or two due to time zones and work Theo couldn't find it in himself to be mad.

the flight had been long and tiring and getting through security with his fake passport had been nerve wrecking. Calcifer and his other weapons had luckily gotten through as ordainments but as he made it through customs he felt down hearten to not find his lover waiting. Maybe he was just topping up payment for parking on the car. Sending a quick message telling the other he would be waiting for him by the luggage trolley park up he sat on his suit case and waited.

He sat there for hours. Elbows on knees, chin on palms. The early morning bled into early dusk by the time Theo gritted his teeth. He had sent message after message and had tried to ring. No answers and his rare temper normally reserved for his traitorous cousin directed itself to his boyfriend. He paid for the taxi to take him, the whole procedure of trying to get one was more of a headache then needed. In the end he wrote the address and shoved it with the money at the driver and sat down glowering with blood red eyes.

Finally arriving he stormed up the steps dragging his bag and hammered on the door that he knew Ran shared with his scarily tall friend Keade. "Open the door you bastard!!! How dare you just abandon me at the airport you dick!!" 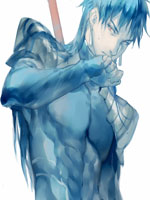 Re: ghosts of you to my resolve