The (Not) Unexpected Visitor

The (Not) Unexpected Visitor

Kitchen? Check. Living room? Check. Bathroom? Check. Bedroom? Check. Art room? Check. Csilla released a small sigh of relief, rubbing the back of her head thoughtfully. Her apartment was clean. Vacuumed and dusted and washed and polished and... clean. Not that her apartment wasn't normally clean, but today it had to be extra clean. She was having probably one of the most important house-guests ever. Her “boyfriend” was coming to stay the week. The festival was six days away, and that was terrifying. She still had SO much to do. She had convinced Elastor to come for the week in order to spend time together. She would be able to make more time in her evenings. Hopefully he wouldn't mind how busy she would be. Running a festival wasn't exactly easy.

She moved from her living room down to her bathroom, stripping down and hopping straight into the shower. As she washed her hair and soaped up her body, she mused. She had set up the futon in the art room, because she didn't exactly expect Ela to sleep in her bed with her. She wouldn't have exactly minded... but she figured it would be best to be prepared, seeing as how they still had no kind of label. Out of the shower, she dried off and dashed to her bedroom. She pulled on clean undies and a nice pair of dark jeans. She situated a camisole over her boobs and tugged on a dark pink button-down shirt. She buttoned it mostly up and dried her hair. She brushed it down and braided it. She looked at herself in the mirror and gave a nod of satisfaction. She was as ready as she would ever be. Her stomach was full of butterflies. It had been months since she had seen Elastor. They had kept in contact, of course, but it wasn't exactly the same.

He still couldn't believe that his new 'boss' was Queen Rachel Ascot. He couldn't believe he had seen her robot heart pajamas sliced open in a knife fight. Even the coronation could be deemed a disaster to current society. There was nothing pristine--nothing straight-laced about her. Creta was doomed and in the face of defeat if she continued to lead the way she did. Was it his job to get her in line? Perhaps that would be overstepping the boundaries. Regardless, with each passing day, he both missed Lord Dietrich and the loopy inspector, Zen Howler. Missed? Something so foreign, he hardly realized he was thinking it. Maybe that was how Nu felt when she looked on her wedding band. Perhaps missing and loss were two different things though. The feeling couldn't necessarily be intermingled. He wasn't sure of anything anymore, which was another reason why he was standing at a door in Central City, Amestris clueless to how he got there. Seeing someone. Talking to someone. Lacking that resulted in...requirement? No...desire? Pale hands pocketed, deadpan eyes burning a whole in the pasted address, he reassessed his reasons for being here. A festival. Of all things he would attend, they had chosen something so far from his expected activities. Well, whether he wanted to or not, the Queen would be in attendance, thus requiring he be as well. Even so, he had a feeling--an inkling that this was not simply a festival--that Rachel would actually find a need for more than just his company. Besides, disaster seemed to follow her like a plague.

The flight wasn't horrible. He was indifferent to travel mostly for the express purpose of being a soldier, but that was beside the point. Dressed not in his uniform for once, Elastor was done up in casual black jeans and an absurdly orange turtle neck. Against the northern cold, it was sufficient. He wore the scarf he had lent Csi for a time along with a rather long black trench coat. High black boots, a knife concealed in the left, buckles, leather, etc. His hair was disheveled as per usual, but brushed despite not exactly looking like it. The only difference this time was that all of it was left down, loose, tousled in the winter winds. His dog tags were securely fastened around his neck in clear view constantly. Identity. He couldn't care less. 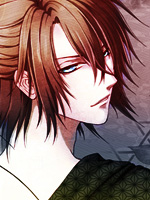 “'Cause Iiiiiiiiiiii want it thaat way!” Csilla crooned, only mildly off-key! There really was no better feeling than dancing and painting. And the pop-beats of Backstreet Boys helped with this painting. It was an abstract, full of colors. Csilla wasn't sure what caused her to begin the painting, but art did what it wanted. Then again, Csilla wasn't sure why she started painting in the first place. She'd always been a pencil and paper kind of girl.

“Hi! Come on in!” Hands fell from his pockets, a door beckoning. Blond hair--bouncy smile. He was lost into it, feeling something similar slide onto his own lips. He shifted from the cold into the warmth, feeling the change in temperature immediately. “Welcome.” The smile fell away from his lips, soft violet eyes growing in size as they widened ever so slightly. Had anyone ever said that to him before? Welcome--he was welcome...? Being the one that asked to come here, she had already given him permission to be here, but to go so far as to... Silently, Ela thrust the cake up and between them, immediately erasing the tension and bewilderment on his own face. Cake. He laughed nervously behind the crinkle of the bag, lowering it as soon as he had regained control over his demeanor.

"For you," he murmured, voice barely gathering volume. He looked away from her and at the wall as if the paint job was much more important than meeting her eyes. Taking a deep breath, he returned his gaze to its rightful place, handing over the cake like a prize she won at a raffle. Of course, this action in and of itself held much more worth than a sullying prize at a stand. The very fact that he had brought anything at all was little short of a miracle. Nervous smile avast, Ela attempted to redeem himself by taking her hand and leading her further into the apartment. Cake deposited on a surface on their passing, they treaded together inward. "Show me around." A offer that sounded more like an order, spoken in the cold Amestrian tongue, still sounding weird in the tones of his voice. He had switched languages just as he had switched countries. The unspoken submission to always speak Cretan around him, bled away now into nothing. Rough words, torn at the edges--no flow--came from him now without an accent of any sort. Last time he spoke Amestrian...was when he had fought with Csilla. To Shula Brighton.

"For you." Csilla beamed in pleasant surprise as a cake was more-or-less shoved in her face. Her brain filled with the sound of “D'awwwwwwww” as she took the cake. What a thoughtful thing for him to do! “Thank you!” Switching to Amestrian from Cretan seemed natural for her, no trip of the tongue for her. She didn't mind either way. She took a more firm hold on the cake with one hand as Ela grabbed her other hand. It made her stomach roll with a few butterflies, but nearly as many as prior meetings. That had to be an improvement! She was getting used to him and all of his oddities. And yet there were just enough butterflies to remind her that she was head over heels.

"You're welcome." He tried to sound pleased, but at the same time, he was more than a little lost in his own mind at the time, vastly aware of the differences between herself and him. What made it so natural for her and so horridly stiff for himself? He could not answer--could not fathom what it was that left him so far away from the light--so strongly established in the shadows that he could not escape them any longer. Perhaps it was where he belonged--perhaps he was wrong all along and that there was only one place he belonged. Was trying a crime to himself then? Was this...forbidden?

The tour was a blur, but he was registering everything nonetheless. It was a great place, much smaller than his own, but very inhabitable. The kitchen was homely, her room was oddly neat than when he was used to seeing from others, and...there were sketches all over the walls. He became curious, leaning evermore closer to get a better view of exactly what they were of. His blue eyes narrowed inquisitively, gesturing over each one his intrigue. Silence. "This is my art room. I made up the futon here.” He looked away and at her directly probably for the second time since arriving, this time longer, deeper; he didn't move. “I wasn't sure where you would want to sleep.” She was nervous, fidgeting; he could tell and that was strange in and of itself. Softly, he smiled, unraveling her hair from her finger and drawing it to his lips where words he'd never say were expelled.

"If you would like, you should just ask." He paused, dropping her hair to her shoulder and removing his eyes from it back to her. He could be entirely mistaken. If he was reading her wrong, though, why was he even here if not to know her? "...if I would like to join you instead." Saying it without directly stating it was oftentimes a professional effort on Elastor's part. This scenario was not an exception. "If anything, I would love to." It was hard, but he would do it. It was not his place, but he would tread through it. It was a breath of fresh air, and he would steal it from her lips.