He glared at the desk in front of him. For once wishing he didn't find alchemy morally wrong so he could burn it. He could almost feel the imaginary collar tighten round his next almost choking. after all he was still a militant dog no matter how fancy his role had been. It was clear Spade had some involment in this. Got it so some man in a fancy suit and fancy label had given him a tough choice. Be second in command...or have no job.

Axel sighed loudly as he flopped against the cool wood surface. A soft pine escaping his lips. He had been tempted to tell the man where to shove it but then he realized...no job meant no way he could run his baby...his beloved helicopter. Regrettably he had to accept the role and now here he was stuck...under Spade. Still not his equal...still the child.... He pouted glaring out the window at the sky....part of him wanted to go get his baby and go out for a spin but he knew that would be frowned upon. Even when he asked for a chopper landing pad on the roof it was rejected.

Again he sighed....maybe he should scout out a bottle of vodka mix...or tequila? 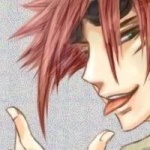 Re: Watch a dog sit