It was night time in the central city of Amestris, this meant next to nothing on how busy it would be. All it did mean is those that did not dare come out during the day now came out in the night. The creatures of the night had power and tricks but no amount of either were able to dissuade many from leaving their homes. One such person was walking with their hood up, their once expensive robe now simply just a tunic with a hood and no sleeves. An automail arm glistened in the many lights that were around, wrapped ears twitched back and forth betraying that he heard much more than just what was around him. He stood apart from everyone else, in one hand he held an enormous sword that resembled a butcher knife... yet this thing betrayed all common sense of how physics even worked. His other hand was upon the hilt of his second sword that was roughly the same size save that it was much more intricately designed with screaming faces. His pants were rough and had multiple different things hanging from them, they ended roughly at his ankle where wrappings took the place of shoes. Another wrapping was on his non automail arm protecting it from both weather inclements and from bruising his knuckles... If he could even do that with how tough his skin was. The being glared around as he waited staring down in what seemed to be nothingness. What was this being waiting for? A signal? A demon? Both? Many questions arouse from those that passed but none would be answered.

Silvac hefted godsend and had the weapon rest over his shoulder, he wouldn't let the blade drag on the ground unless it was with an opponent under it. His ears spasmodically twitched as he thought he heard something. He was pretty sure his captain was around, while the younger chimerae was much more agile than the shark chimerae silvac probably would be able to keep pace with him... if he could even figure out where the hell the damn thing had gone. Then again if he lost track of the little guy maybe he wasn't able to. Silvac didn't care, he stuck with Sal because of what they had done to get him out of that horrible place he was stuck in a while back. Silvac's thoughts were taken away as a car pulled up and some strangely clad men with large gold rings and what appeared to be fluffy coats stepped out of the very nice car. Sal would like this car, or he would maybe if he was even here at the moment. The men were speaking in a language he didn't recognize but the tone was clear, they wanted silvac gone or dead and he wasn't going to stand for that. When one of them pulled out a firearm silvac let out a bellow of a challenge and swung godsend one handed backwards into the man.

The man did get off a shot but it simply pinged off the automail arm as he was bodily thrown almost ten feet into the side of a wall leaving him crumpled and probably dead on the floor. The next two pulled out some weird cane and held them like clubs, Silvac didn't bother switching directions with his sword and on the back swing Silvac chopped both men in half leaving their torsos screaming on the floor in their own gore. The few bruisers that were left stood with their jaws agape only for a moment as Silvac descended upon them as well. No one dared to stop him at this moment, He let out a little huff as his sword was driven all the way through one of them and into a wall leaving the man pinned there. Instead of pulling the sword out of the wall Silvac grabbed the still living man's feet and dragged his writhing body down splitting him in half. Silvac dusted off his hands that were now drenched in the blood of the men and then picked his sword up. Sticking his head into the car he noted that there was about ten or so women in here staring at him in utter shock. He narrowed his eyes and growled at them, instead of screaming they opened all the car doors... and ran like hell away from the chimerae.

Lucky for the chimera the vehicle was a convertible so he was able to slide the top back and set his sword in the back. From what he could see there was no shift... there was only the key that let him turn the car on and then the two pedals. Apparently this thing was an automatic? Silvac didn't know cars too well, he knew how to drive them thanks to his old days though. Shifting his weight so that one foot was on the gas and the other was ready to be on the break Silvac slowly accelerated the car.... And bumped into the wall. He really didn't have a clue on how to actually operate the car anymore. Instead of trying again the chimerae simply sat on the trunk end and waited his face completely blank. One of the men was close to him so he simply pulled off an arm and had himself a late snack. 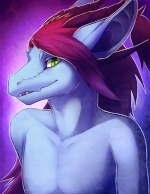