A Day At A Bar

A Day At A Bar

Alex was walking through the capital city of Gelemorte. He was barely interested in anything except finding a bar. He was just getting over his wife’s death in Esparia and just needed a good drink. As he entered a bar taking note of the name for future trips here if any. A bar is always a good place to be in his opinion. He walked in and looked around as he sat at the bar and ordered his drinks.
Telling the bartender to leave the bottle of rum he slowly poured out the dark golden beverage into his glass. The amber colored drink was strong and well made as he could taste the flavors added like the coconut and slight vanilla to bring out the flavors inside. As he drank his finger tapped on the oak wood bench and his eyes wandered to look around the room. He saw many people playing darts pool watching local tv and just drinking and chatting. He would laugh a bit and countinue drinking maybe something good will happen today.

What the fuck was she doing here..... Seriously... Why in the world had she listened to his request and agreed to it? The two had met, been ok, exploded at each other, and now she was staying in his fucking bar. What the fuck was this shit. And on top of all of that, the guy was a fucking homunculus! What the fuck. Ugh.... Alisa was perched in a black turtleneck and red pleated skirt, thick black tights on beneath it to help keep what little heat she could in. Brown cowboy boots were on her feet and black fingerless biker gloves covering her hands. Her brown hair was tied back into its normal ponytail, though two locks fell in front of her ears on either side of her face forming a sort of frame with the bangs that wanted to tickle at the corners of her eyes. Her two Cutlasses were in their holsters beneath her arms, a cigarette dangling between her lips as she sighed heavily in her frustration. This place... was fucking boring. Even with the occasional outburst from King, this was still some boring shit. He was at least entertaining though, if a little idiotic about some things.

The clanging of the bell was what drew her attention, raising an eyebrow as she glanced over to the man that had come inside. Huh. She hadn't seen him before. He didn't seem like a regular either. Though she was sitting at the far end of the bar near the wall, she gave a whistle to get the mans attention. "Oi, who the fuck are you? I haven't seen you here before." She called, the regulars not even batting an eyelash at the manners of this girl whom had invaded their bar for the past couple of weeks. 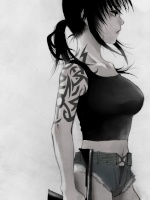 Alex looked around and noticed a girl who seemed to stand out as much as he did. He shrugged it off and sipped his rum as he tried to clear his mind. And as he looked up his ears perked to someone trying to get someones attention “"Oi, who the fuck are you? I haven't seen you here before."” He turned to look at who was being called only to realize it was probably him. He muttered in rough cretan “What the hell did you say? I didn’t understand?” he figured creta was probably the closest country to here that’s language he personally knew. He really needed to expand his horizons but it was such a pain in the ass to learn new languages.

The man turned, but she could pretty immediately tell that he hadn't understood a damn word that had come out of her mouth. Fucking perfect. “What the hell did you say? I didn’t understand?” Cretan. Alright, so was the guy a Cretan then? Meh, whatever. She turned in her stool to face him, one elbow resting on the counter as her smirk seemed to grow, her other hand resting in her lap. "I said, who are you? I haven't seen you around here before." She repeated, deciding it was better to edit herself for the moment despite wanting to just snap at him. "You stand out like a sore-fucking-thumb." ... So much for editing herself. She wasn't very good at it that was for sure.

Alright then My Name is........Wait why the hell would you need my fucking name? But Its Alex. he goes and checks his phone before sipping his rum at a slow steady pace. he then closed his eyes and takes a breath. he hasn't been in a good bar in a while. last time he was in one for a drink was when he and Jay met. Good times good fight lots of blood and all that. now he had to wonder what he should do now as he was somewhat unsure of what to do as of recently.
He ran a hand through his hair and thought about it. the dreads they once were a connection to his past but now as his goal was achieved and the grief of losing a loved one beginning to pass he had to wonder. What was his purpose in this world anymore...He could quit the military he had enough back up research to last till his death and then his children death. He could start doing some side jobs as a bounty hunter or something. but maybe he could do something else for a while. maybe he should try to actually get promoted.

Alright then My Name is........Wait why the hell would you need my fucking name? But Its Alex. Her eyebrow twitched slightly, oh greeeaaat... His manners were about as good as hers. "It's just a question ass." She snapped before she could even really think about it, immediately gritting her teeth as she gripped her glass and downed it quickly. Fuck this being nice thing was hard. Now she felt all responsible and shit for talking to him, like she should keep talking to him or something. God dammit. "So... Alex.... Why are you here?" The question felt so weird on her tongue, it wasn't like she really cared all that much. She was definitely curious though. Who in their right mind would want to come to this god forsaken island that was so fucking cold? A cigarette was produced from... somewhere, her zippo flicking on as she lit the end, breathing in that death stick with a sigh. Ok, that made this whole thing a bit better.

Pouring out another glass of rum he downed it. He was still thinking about possibly just leaving and going cliff diving to a spotty death. Or maybe he'll get shot by a sniper again. Damn Nyx for saving him that day he might have had peace. Now that Alex was thinking about it the last two times he's about to die some random girl has stopped it and saved him. Oh we'll movin on there was the fact of the matter that he really needed to forget and he only knew one way how getting shitfaced drunk in a bar. So he thought about his options and shrugged before turning and saying "Alright how about a deal if you can out drink me ill tell you anything you want to know or I win ill leave sound fair?" yup that was his offer and he was damn proud of it. So without saying anything further he shrugged and thought.

"Alright how about a deal if you can out drink me ill tell you anything you want to know or I win ill leave sound fair?" Oh really? Was he really asking her this right now? Raising her eyebrow, she grinned and took a decent swig from her bottle of whiskey, sizing up the man as she slid around the bar to grab the shot glasses from their usual spot. She knew where King kept things. A moment later, she was moving around to the front of the bar to flop down on the stool beside him, the glasses thudding in pain upon the wood with the amount of force she used. It was probably a miracle that she didn't break them. Honestly, she was happy for the excuse to hold a drinking contest like this. Few people ever did because this was her, Alisa Donnikova.

Pouring whiskey into the two glasses, she placed the half-filled bottle back down and puffed on her cigarette, reaching to pull her ashtray closer before tapping out the ash. Knowing King, if she did spill ash, she'd have to clean it up afterwards. "You're on. Unless you got complaints using whiskey, then we begin in 3..." She picked up her shotglass, "2..." Its rim was touching her lips, "1." And with that, she downed her first glass. Licking her lips, she placed the glass down and grinned at him. "To whomever hits the ground first."

Alex didn't really care anymore he finnally had a good drink so the competition was just to see if this chick could hold her liquor. And ease so of his boredom at the moment. So as he looked he raised an eyebrow. Thinking they might need more whiskey later on he lifted his tumbler glass and raised it to his lips as she counted down and as she reached one he threw his head back taking gulps of whiskey the familiar burning sensation bringing him back to a better time when he could drink freely an not have to worry about things such as hangovers. Now as he moved to refil the glass he had a couple thoughts some simple others just ludicrous in their own right and he sometimes argued with his thought and the worst part was he was losing. Now as he countinued to think he stopped pouring and offered to pour her another glass without really thinking.