Jet sat in his empty home staring at the ceiling, his mind wandering all over the place. He thought of his parents watching over him, his sister helping repair Fort Briggs, Cironis re securing the western border, heck even Saga crossed his mind. Yet two things seemed to make up the bulk of this thoughts, one very depressing and the other uplifting. The images and travesties of war are not so easily shaken, even in a man like Jethro Black. He'd seen his fair share of bloodshed and death, but it never did get any easier. Especially when good men and women died under his command.

The recent attack on Fort Briggs was called a 'tragedy' in the local news reports, some even calling it 'an immense lack in border security.' The one story header that angered Jet the most however was 'The Unconquerable Briggs, does it truly live up to its name?' Just the thought of it made the Knight fume, throwing a pillow harmlessly to the floor. Without even noticing however, his thoughts drifted to a happier place. Though he was home alone for now, Emma was on her way from Central to stay with him for a few days. They'd both earned their 'short leaves' after the recent events in Amestris, both of them seeing their fair share of loss the last few days. No words could quantify how important these next few days were to him, spending this time with the love of his life made it that much better.

Wearing a dark purple sleeveless shirt and grey sweats, his hair was still damp from his recent workout. Several laps around the block, looks from the local ladies (ignored as always by the happily taken General), a few rounds in the simulation room, and an hour of sword form: what he liked to call his 'light' workout. Most people when hearing this gaped, but in all reality it paled in comparison to his 'heavy' workout, which normally went for 8 or so hours straight if he had the time. Of course that was rare ever since his appointment as second-in-command of Fort Briggs, mostly taken up with paperwork and helping Reila run everything. Grabbing a towel, he rubbed it across his head and let if fall onto his shoulders, looking down at his phone to check the time. Nearly time for Emma to arrive! Excitedly he jumped to his feet, a new vigor taking over. In some kind of run/skip hybrid, Jet made his way upstairs to take a quick shower and get into some better clothes.

Finished, he threw on a blue t-shirt and jeans while singing 'Feeling Good' as loud as he could. His big voice echoed throughout the empty house, filling every crevice with sound. "It's a new dawn, it's a new day, it's a new life! For meeee!" he sang aloud as he jumped down the stairs two at a time. Sliding into his piano, he played along with the song and continued to sing, knowing the chords by heart. Chuckling as the song ended, he walked over to his ipod and turned it off. Just as he did this there was a light knock on the door: Emma! Trying to contain himself, he grabbed the bag of Gelemortian chocolates he got for her and hid it behind his back. Opening the door, he smiled to his beloved standing before him. Unable to keep himself from grinning, he wrapped his arms around her lightly and kissed her on the lips firmly, passion flowing between them both. Man he had missed that! "Oh I am so happy to see you sweetheart, I've missed you!" he said, excitement rivaling a little kids filling his voice.

The train ride was long and tedious. But after all that had happened she had only wanted to curl up and sleep. in the space of 48 hours she had lost everything. For a brief moment she felt the cold fer of war and the horrid pain of almost losing her brother and the idea of losing her lover too. Huddling the scarf closer to herself as the train pulled up in west there was no jet on the platform waiting to great her. cursing her lack of a car she headed to the taxi stand asking if it was possible to get from point to point b.

The wait for a free cab had been short luckily and soon her bags where packed and she was sat inside watching the landscape zip past in blur. part of her fearing this was a cruel joke or dream and she turn up to find jet not there or wake up alone. knots growing in her stomach as the car pulled to a stop and she gathered her things. a few passing by women muttered between themselves spotting her walking towards the door dragging long the suit case. A snide jealous comment made her lip curl slightly and her nose wrinkle in annoyance. some women...

Gently knocking on the door she bit her lip in anxious anticipation. praying that this wouldn't be a dream and soon she have the desperate conformation she needed to show her the man she loved so dearly was alive. Soon the door swung open to reveal his smiling face. His arms wrapped round her filling her senses with his warmth and scent. His lips sealing her confirmed everything and in a rushing wave of emotion ll the feat and horror she had bottled up that day flooded out as the flood gates opened. she buried her face into his shirt and sobbed clutching to him in such a child like manor. But now she knew he was safe and nothing made her happier. 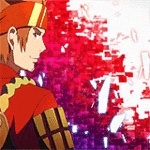 Jet pulled her close, his plan to never let go seeming a reality as she cried lightly onto his shoulder. His lips lightly pressed to the top of her head, taking in her scent with a deep breath. The smell nearly overwhelmed him, his knees beginning to wobble just from a moment with his Angel. The thought suddenly crossed his mind, small yet simple. He could do this forever and never grow bored, only more and more in love with her. As if reacting to this thought his hand nearly reached for his pocket, only his focus on holding her close keeping this from happening.

Flashes of war crossed his mind, the dead from Fort Briggs appearing as if from nowhere. Sadness and rage filled his heart simultaneously creating a strange concoction he could barely recognize as either. One side of the General bid him to seek vengeance, to strike back at Drachma and RIOTE and make them pay for every Amestrian life lost. Yet on the other side of the coin, he knew that hatred only created more hatred. If Amestris hadn't attacked them unprovoked in the first place perhaps nobody would have had to die for a pointless war... He knew that wasn't all though, RIOTE would have attacked them eventually, maybe not now, but innocent people would still die at their hands. And this would continue to happen unless something was done, soon.

With a deep breath, the scent of his beloved filling him completely, he pushed away these dark thoughts for another time. The time to show RIOTE what they had started would be later, but as always his focus was entirely on the absolutely beautiful woman in his arms. Even after a war, even while crying into his shirt she was still breath taking. His heart skip a beat every time he looked in those emerald eyes. He loved this woman, without a shadow of a doubt!

As the realization that he could have lost his love yesterday hit him, tears began to gather in his eyes as the Knight pulled her closer, hoping that he would never have to let go again. Knowing his princess was crying stopped him however, and Jet wiped his tears away before kneeling down in front of her. Putting his hand on the side of her face, he used his thumb to wipe away her tears. "No tears my love, nothing will keep us apart. Even if RIOTE won and Amestris fell I would fight to my dying breath to protect you. You're my everything, and without you..." The tears began to well up again, and his voice began to falter. "I... I don't know what I'd do..." He found himself hanging his head, his mind unable to comprehend a world without Emma by his side. Tears fell to the floor, a soft plop sounding as they hit the hardwood. Again he found his hand reaching for his pocket, keeping the urge at bay again. Not now, not just yet...