Reaver's rent a carriage pulled up outside the Palace of Versailles. Yes Reaver was that kind of person he just had to snap his fingers and a classy horse drawn carriage pulled by several dazzling black stallions would be ready for him. After all he was a man of style and the queen diva too.

Soon he was outside Lust's shabby looking palace. He tutted softly as the horrid stench of wet dog invaded him. Seriously the girl needed to do this place up and deal with the horrid order. Stepping out in his hand a fine boquay of white roses and a bottle of fine champagne. He would rather be doing something else but after having to cancel on her before a true gentleman had to make it up to her.

Barry stumbled behind him and trotted up to the door. The wolf chimera in him making him a bit edgy as the man knocked on the door. "Mistress Lust...Master Weaver is here to see you!" He called. 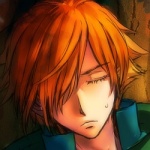 Solitude was such a funny thing, and after all these years, even Tanandra hadn't figured it out just yet. When she spent weeks touring for shows, filming, or the last several weeks that she had been doing live shows for Macbeth, part of her kept wishing for alone-time. The constant throngs of fans, handlers, agents, other performers... It was endless. Not only did those weeks grant little sleep, but less time to relax and think clearly, even though the steady supply of flowers and fruit baskets were quite nice. But now that she was back home in Rouen? Company. Tanandra had her wolves, always, but they were the only ones with her. Living in the once-great palace of the Rouenian royal family, Tanandra was alone, not just on the property, but the whole of the island, Rouen still owned by Esparia, fenced off and guarded from tourists, thrill-seekers, and newshounds alike. Occasionally documentary specialists and historians were invited to explore Rouen and its lush jungles and be entertained by the exotic birds, but it was rare.

So when the wolves around the grounds becmae restless that someone was coming, a strange scent carrying downwind, Tanandra was more than curious. Who on earth was here? Someone from the Esparian government? Someone trying to prove her connections to RIOTE and kill her? She smirked. The latter would be rather entertaining. Short-lived, but it'd alleviate a few minutes of boredom. Delicate, perfectly soft and pedicured feet stepped through the polished marble halls, long black silk hanging low from her hips, a bandeau above barely containing her breasts. Someone was knocking, now. "Mistress Lust...Master Weaver is here to see you!" Tanandra moved a hand, sending a wolf to get the door, the large, golden-eyed chimera looking at Barry placidly, neither smiling nor frowning. The grand door opened wider to reveal Barry standing there with Reaver himself not far behind, dressed exceptionally, and bearing flowers and champagne, and a... horse-drawn carriage in the drive.

Really. That man was a wonder. So much swag he could furbish a luxe carriage in a desserted, ruined nation. Tanandra smiled, stepping out of the door, black silk swaying with her legs. "Reaver! What a wonderful suprise." The exotic mix Rouenian and Esparian accents mingled with the Cretan words like tropical fruit mixing with brandy and wine to make sangria. Even coming unexpected, Tanandra would not be a poor hostess to Reaver, especially if he'd come armed with flowers and champagne; that was always a sign to make a man as stylish as this welcome. The wolf at the door sniffled subtly at Barry, still silent and alert, watching the guests carefully. Tanandra glanced over at him. "Jean, go have Emille tend to the carriage and horses, and then let the kitchen know we have guests tonight." The wolf nodded and turned silently, speeding off to find the staff. Turning her gaze back to Reaver, Tanandra stepped to the side of the grand double-doors. "It is wonderful to have you here. Please, won't you come in?" 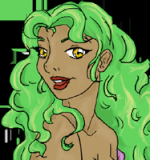